Redesigning previous OC.. If you can guess who.. X3 Try to post this from iphone! =D

[ Jun and Odette from Memoria Somnium ]

First sketch for GoA RP group! XP It’s pencil, but going to paint over it right about now, lololol~

A sketch preview of commission for Essence of Time creator, Deamond89. I give up trying to make the pencil drawing clean. X_____X;;;;;  Drawn on 3 pieces of A4 paper sellotaped at the back, LOL xD;;; This is supposed to be a simple commission slot, but it turned out to be so huge… ^^;;;;

Concept art sketch for a MQ future character! One of the other Elf Knights (besides Zirkon-sama)~~ >v< His name is Spinel! He’s one of the best friends to Zirkon.. His design isn’t finalized yet though, this is just one of the sketches I came up with while thinking of a design for him.. ^^

I think later, when he’s actually in the comic, just drawing his hair is going to kill me… @@

WIP of $5 quick commission for Nikoru-chan. ^^ Her character, Yoink, a magician. Who can turn into a plushie. x3 I love him already, lol!! <– Lily <3 plushies 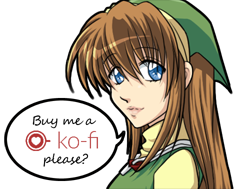